By 2050, humans will experience a giant food gap, while nearly 30% of food produced in the US ends up in landfills. Two opportunities: demand for alternative protein sources and the need for a viable solution to food waste. Two solutions: protein-based ingredients like insect flour powered by food waste, and a new public perception of gourmet insects. Experiential culinary adventures can help!

Janos Wilder began cooking as a teenager in a local pizza parlor and continued cooking throughout high school and college in numerous restaurants in Northern California, Nashville, Tennessee and Boulder, Colorado. Initially his foray into the restaurant world was fueled equally by an interest in food that developed into a full-fledged passion and the practical need to find a job. Working his way up through restaurants came easily to Wilder and he used his experience as a means to support himself while attending the University of Colorado and later while getting a degree in political science from UC Berkeley. 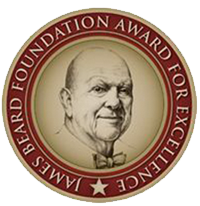 After graduation, Janos’ culinary odyssey included a stop in the high mountains of Colorado in the late 1970′s where his three-year stint as chef at the historic Gold Hill Inn sparked a respect for local ingredients. His changing menus were informed by the ingredients of the regions including herbs and vegetables from neighborhood gardens, foraged mushrooms and suckling pig from small farms on the plains.

A short stop cooking French food at a small restaurant in Santa Fe led to more in depth study of French cooking in Bordeaux where Wilder traveled in 1982. He worked along side the chefs at La Reserve, a Michelin two star Relais et Chateaux and Le Duberne, a one star fine dining restaurant and bistro. At these restaurants he was exposed first hand to the techniques of French classical and nouvelle cuisine. In learning more about French cooking he came to appreciate the French chef and his relationship to his gardeners.

Janos returned to the states determined to cook French food. After locating in Tucson he realized the local gardens yielded chilies, beans, squash, cilantro and more chilies and beans. Resolving this culinary conundrum was the key to success that has propelled Janos to national prominence as a trendsetter and originator in Southwest Cuisine. Rather than being limited by what at first appeared to be a rather meager array of ingredients with which to cook, Wilder began exploring. Soon he discovered the Southwest to be a treasure of ingredients including the fruit from the Prickly Pear cactus, mesquite flour, blue corn meal, tropical fruits and produce from Mexico and seafood from the Sea of Cortez. In 1983, before advertising for staff, Wilder advertised for gardeners to begin planting seeds for the foods that he would soon serve.

On Halloween, 1983, Janos opened its doors in a landmark adobe home in Barrio Viejo on the grounds of the Tucson Museum of Art. The opening menu was a marriage of French technique and local ingredients that quickly caught the imagination of local diners and national critics. Within months the restaurant was written up in the New York Times and in 1984 was named one of the nation’s top regional restaurants by Playboy.

In 1990 wrote Janos: Recipes and Tales from a Southwest Restaurant published by Berkeley’s Ten Speed Press.

In 1998 the restaurant relocated to its present home in a free standing building on the grounds of the Westin La Paloma Resort and Spa overlooking the entire Tucson Valley. In 1999, under the same roof as Janos, J BAR was opened as a casual, less expensive alternative featuring the foods of Southern Arizona, Latin America, Mexico and The Caribbean in a style which emphasizes the conviviality of the shared table.

The James Beard Foundation named Wilder as the top chef in the Southwest in 2000.

Working as a consultant for the Gila River Community, Wilder opened KAI Restaurant at the Sheraton Wild Horse Pass Resort and Spa in October, 2002. The menu at KAI is based on traditional crops grown on the Gila River. At KAI, Wilder has created a very modern menu using ingredients that have been grown by the Pima and Maricopa Indians for hundreds of years. The restaurant is set in a beautiful dining room overlooking the Estrella Mountains south of Phoenix off Maricopa Road. The Arizona Republic gave KAI 5 Stars and named it Phoenix’s Best Southwest Restaurant.

From the Downtown Kitchen + Cocktails site.